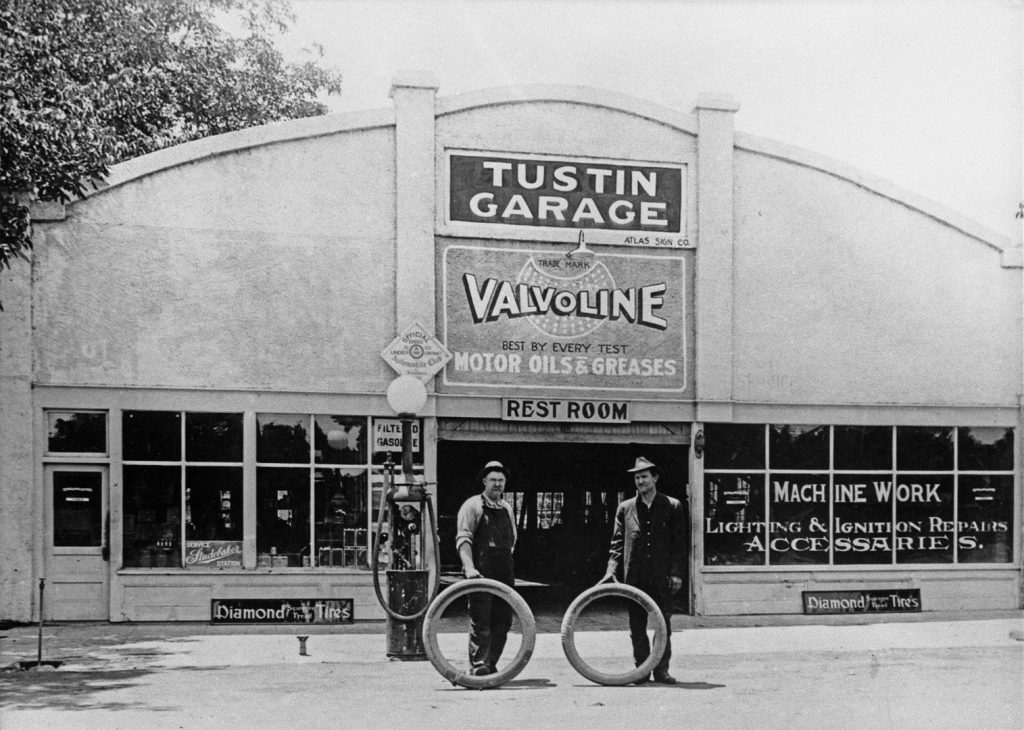 Years ago, motorists were not concerned with the miles per gallon or fuel economy offered by the cars they drove. Gasoline was plentiful and cheap and cars were gas guzzlers by today’s standards. As my dad once commented when he was test-driving a new Dodge sedan, “This car can pass anything but a service station.”

Tustin met the demand with almost a dozen filling stations, as they were called then, and garages with gasoline pumps on the less-than-two-mile strip of Highway 101 passing through the community.

Motorists approaching Tustin from the west on First Street negotiated a broad curve into D Street (El Camino Real), passed through the heart of the downtown area, then made another curve onto Laguna Road just past Sixth Street, crossed Newport Avenue and passed in front of Tustin High School as they headed to Irvine, El Toro, Laguna Canyon Road, San Juan Capistrano, San Clemente, Oceanside and San Diego.

Park’s Texaco at First and Tustin Avenue greeted them as they approached the outskirts of Tustin. Two more blocks and Case’s Smiling Associated station and Jerome Kidd’s automotive repair were ready to serve them at Mt. View and First. Three blocks east at C St., Becker’s Garage advertised Fords and Mercury’s in addition to repairs, tires, batteries and accessories.

Bristow’s Signal anchored the southeast side of the curve onto D Street from First, and three blocks south at Third Street Carson and Golding offered tire recapping, tires, lubes, batteries and Shell gasoline. A Gilmore station proclaimed “Roar with Gilmore” at Main and D. Just around the corner between D and C on the north side of Main, Oscar A. Leihy, who started with a bicycle repair shop and sporting goods store, had added an automotive garage to his business mix. The Tustin Garage did repairs and pumped gas at Sixth Street. If a motorist failed to stop at one of these suppliers, he had a last chance at either a Chevron or Signal station as he left town.

Amazingly, all these stations and garages stayed in business for years although the owners frequently changed. Bristow’s Signal became Tustin Service when Kenneth Cawthon bought it in the early ’30s and switched to Mobil Oil. Harry Holmes bought the station some 10 years later, but kept the Tustin Service name.

Console & Sisson bought out Becker. Later Kidd moved his business into the building. The Gilmore station became Daniel’s Mobil. The Signal station was originally owned by L.L. Hood, but Austin Pierson took over in the late ’40s and Frank Greinke later occupied the premises.

Tustin Garage was started by William Huntley and Nick Gulick in 1915 and survived into the current century, although the owners changed several times. Now the building is in process of becoming a restaurant.

Early service stations operated differently than today’s self-service operations. The high school boys hired to serve customers not only filled the tank, they checked the oil level, the water in the radiator, added air to the tires and washed all the windows. In addition, a motorist could usually get a map or at least directions to guide them on the highway.

PrevPreviousHome Garden Tour of 2019
NextThe battle for the Southern PacificNext