Tanks for the memories (Gas stations in early Tustin) 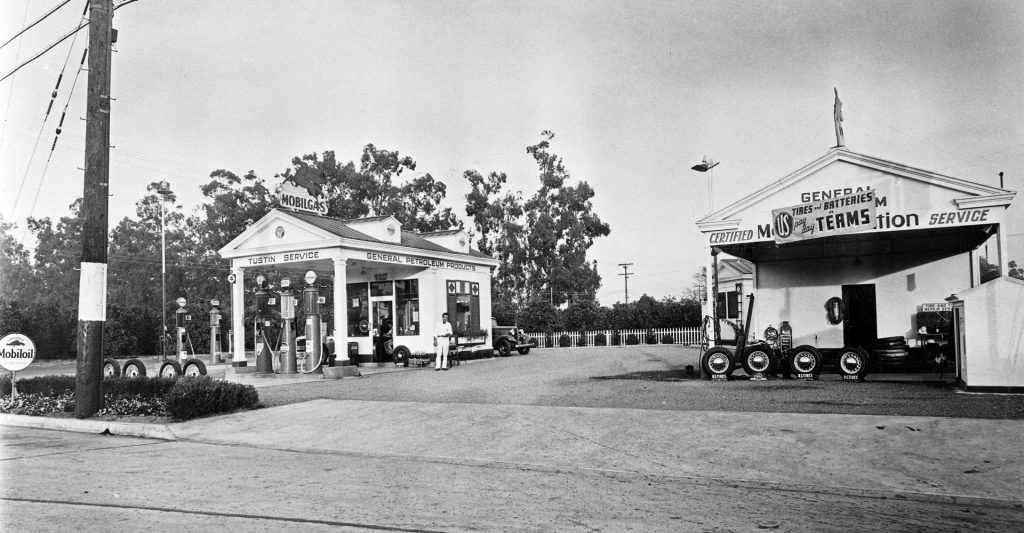 Old Town Tustin had 10 service stations including Tustin Service on the curve at First and D in the days when Highway 101 was the main route between Los Angeles and San Diego.

I was surprised the other day to see Old Town Tustin’s last remaining gasoline station at the corner of A and First shuttered with a high fence surrounding it.

Tustin once had 10 service stations and gas stations on the less-that-2-mile strip of Highway 101 passing through the community. The Tustin Garage, now a barbecue restaurant, was the first business serving motorists. Originally opened by Will Huntley and Nick Gulick in 1915, at the corner of Third and C, it later moved to D (El Camino Real) and 6th. The original owners eventually retired, but the business survived into the present century.

If they passed both of these opportunities to fill their tanks, they could stop three block farther east at Becker’s Garage. This enterprise advertised Ford V-8 and Mercury affiliations in addition to gasoline, oil, general repairs, tires, batteries and accessories.

Bristow’s Signal originally anchored the curve onto D Street from First, but the business became Tustin Service when Kenneth Cawthon bought it in the early ’30s and switched to Mobil Oil. When Harry Holmes took over the business in the 1940s, he kept the Tustin Service name.

Three blocks south at Third Street, Carson and Golding offered tire recapping, tires, lubes, batteries and Shell gasoline. A Gilmore station occupied the southwest corner at Main Street. Oscar Leihy, who started with a bicycle shop on the north side of Main between C and D, eventually serviced automobiles.

The Tustin Garage, as already mentioned, was in business at D and 6th. A Chevron station occupied the D Street curve into Laguna Road, and a Signal station pumped gas a short block later at Newport.

Amazingly, all 10 stations and garages managed to stay in business for many years. In these years before self-service, customers got the full treatment. No motorist drove away with just gasoline. Each car received oil, radiator and tire checks as well as a sparkling clean windshield and windows. Local high school boys were hired to provide this level of service.

Stations and garages remained in the same locations, but the owners and gasoline providers changed from time to time. Becker’s Garage was sold to Console & Sisson. Later Kidd’s Garage moved into the building.

The Gilmore station in the heart of Old Town eventually was converted to General Petroleum products and renamed Daniel’s Mobil. L. L. Hood, who originally owned the Signal station at Laguna Road and Newport,was bought out by Austin Pierson. Frank Greinke’s company later occupied the premises.

Progress means drivers now pump their own gas, while once they remained seated as others hurried to wait on them.