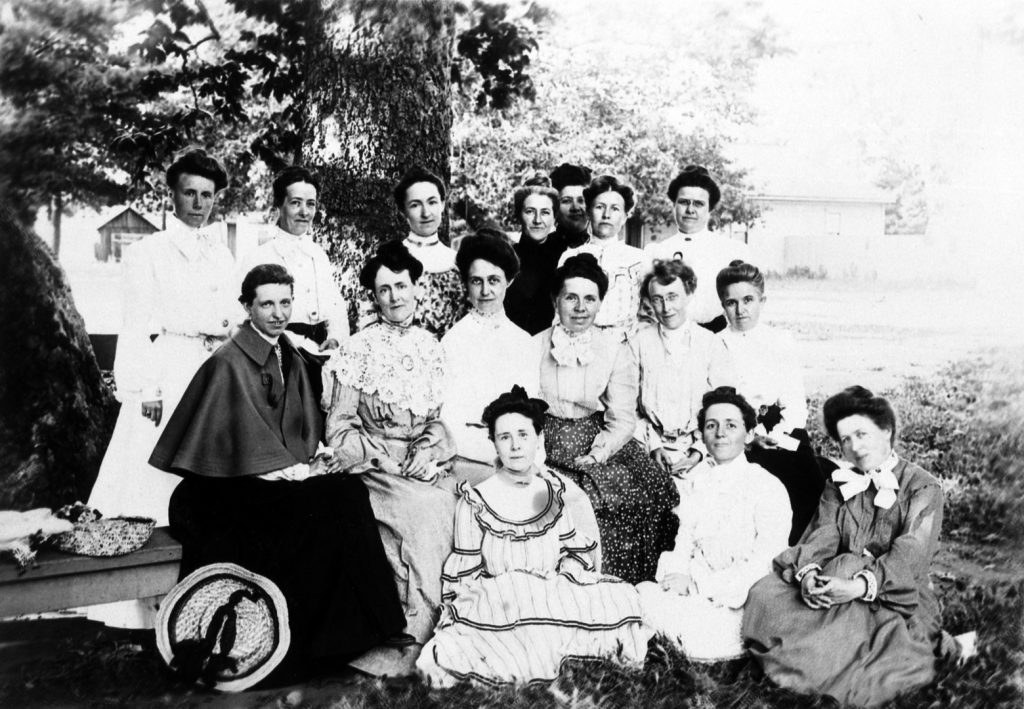 By 1890, daughters of the early settlers formed second generation of young women found more time to do church work, socialize, enjoy tea with one another and participate in activities that had not been enjoyed by their mothers

Life in Tustin in its earliest years was bleak, but as the 1870s advanced conditions began to improve. Elegant Victorian homes were built during the 1880s and 1890s. Churches were chartered. Wealthier, more cultured settlers arrived, bringing with them a refined lifestyle plus an interest in music and the arts.

By 1890, daughters of the early settlers formed second generation of young women who enjoyed these amenities. These ladies found more time to do church work, socialize, enjoy tea with one another and participate in the Ebell Society activities that had not been enjoyed by their mothers

Soon they were marrying, often selecting husbands from the same occupational field as their fathers, raising or working with citrus. The two Snow sisters, daughters of Horace C. Snow, were typical of this generation. Martha married Sherman Stevens, a wealthy Tustin orange grower who was her father’s partner in a Santa Ana lumberyard. Their marriage at the Tustin Presbyterian Church in 1887 was followed by a lavish reception at their new home across Main Street. This celebration was a foretaste of the gracious life of travel and collecting they would enjoy.

Martha’s sister, Grace Snow, was less fortunate. She married Frank Frees and became a widow with two sons, Ben and Norman, when her husband was killed in a windmill tower accident in 1898.

Anne Adams was the daughter of P.T. Adams, an orange grower who came to Tustin in 1877. She married John E. Gowen, part owner of the Gowen and Willard Fruit Packers, and soon became a popular member of the young married set. Rachtje Vandermuellen, whose father Peter Vandermuellen owned citrus acreage on First Street west of Tustin Avenue, married another citrus rancher. Her husband, Arthur E. Bennett, was also a fumigator. They made their home on Second Street between Pacific and A.

A few young women, such as Fannie and Mattie Tustin, daughters of Columbus Tustin, held jobs before they were married. Both of these sisters served a term as postmistress of Tustin. Mattie’s husband, John E. Curry, was president of the Tustin Protective Association, an organization formed to combat crime in the citrus orchards. Fannie, the youngest daughter who married after her father’s death, continue to live at home even after she married Clayton Park.

Mamie Sheldon, daughter of Dr. James Sheldon, Tustin’s first doctor, was another young woman who worked. She was the bookkeeper at the L. Utt Pioneer Store when she attracted the attention of C. E. Utt, Lysander’s son. They married and had five children before her death in 1918.

Another pair of sisters, Jeanette and Nellie Wilcox, daughters of Charles Wheaton Wilcox, were popular young socialites both before and after their weddings. Nellie married A. J. Padgham while Jeanette wed Adolph A. Kraft.

Stella Preble, daughter of S.W. Preble, became known for her lavish and unusual parties as well as for joining with Madame Modjeska and Coralinn Rice in presenting benefit musical programs, often at French’s Opera House in Santa Ana. She remained unmarried for many years, finally marrying Sam Nau after both her parents died.

These young women were the forerunners of life as it is lived in Tustin today.