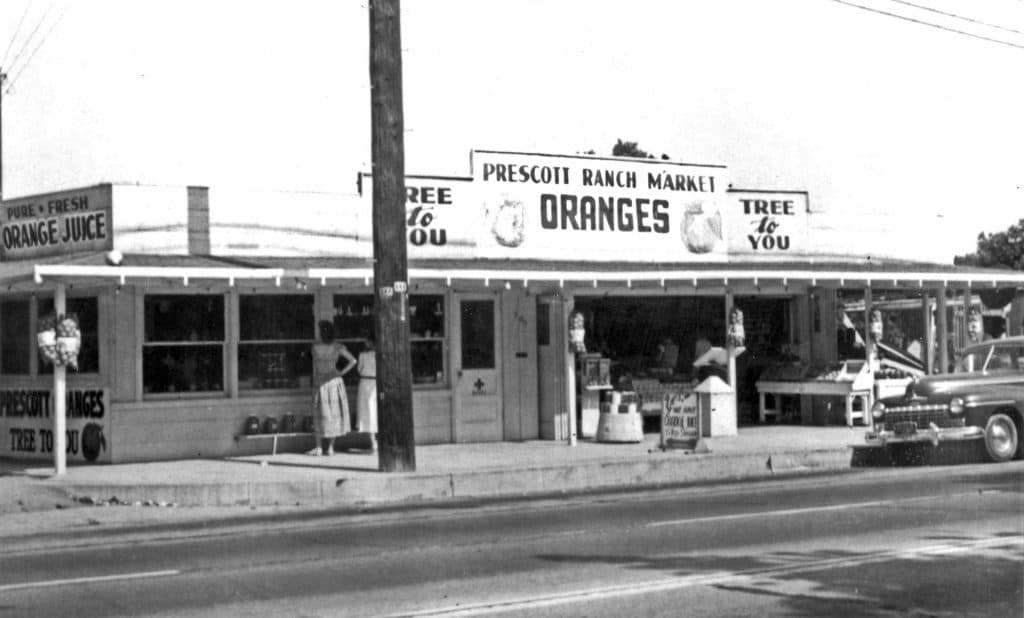 Passengers clambering down from the bus were hard put to make a choice of what to do first. Should they have their picture taken alongside an orange tree or respond to the lure of the sign reading “Orange Juice. All You Can Drink for a Dime.”

Three times a week in the years before World War II a Greyhound bus traveled Highway 101 on its way from San Diego to points north. Without fail, the vehicle would pull to the side of the road in the middle of Tustin for a rest stop.

Undoubtedly this was a natural place to stop between the southern city and Los Angeles, but the Prescott family liked to think that the orange juice served at their Ranch Market had something to do with the bus driver choosing Tustin for his stop. Located approximately where Armstrong’s Nursery operates today, the market was bordered by a small orange grove which extended to Sixth Street.

Passengers clambering down from the bus were hard put to make a choice of what to do first. Should they have their picture taken alongside an orange tree or respond to the lure of the sign reading “Orange Juice. All You Can Drink for a Dime.”

The Prescott’s became orange growers when Julian A. Prescott came to the Tustin area in 1912 and acquired property at the corner of 17th and Newport. At one time his wife, Mabel, operated her own orange packing house. After her husband died, she continued to manage the 27-acre grove. As their only son, John, grew older, he joined her on weekends in selling their fresh picked oranges from the back of the family truck.

On July 4, 1941, Mabel, with John’s assistance opened the Prescott Ranch Market on property the family owned on D Street (El Camino Real) between Main and Sixth. The original market was open air, protected from the weather by a palm frond roof supported by redwood posts. As the business grew, they enlarged the building four times and added restrooms to serve the travelers.

Their inventory expanded to include tomatoes, corn and other products raised on Prescott property, as well as produce grown by others in the area. Jams and jellies from Utt Juice Co., eggs from a local egg ranch and milk and ice cream from Excelsior Dairy were added to the inventory.

The market continued to thrive in the years after the war until the construction of the Santa Ana Freeway routed traffic around downtown Tustin and cut off their supply of customers.

In the years after the market closed in 1956, several other businesses including a doughnut shop and a real estate office, occupied the location. The building also became a temporary headquarters for various political campaigns. The Prescott’s tore it down in late 1970. (Editor’s note: Armstrong Nursery on El Camino Real is located on the property today.)

John Prescott graduated from Tustin High School and earned a degree in agriculture at Cal Poly San Luis Obispo. After he married in 1950, he and his wife, Mary, continued to live on the family ranch. They had four sons.