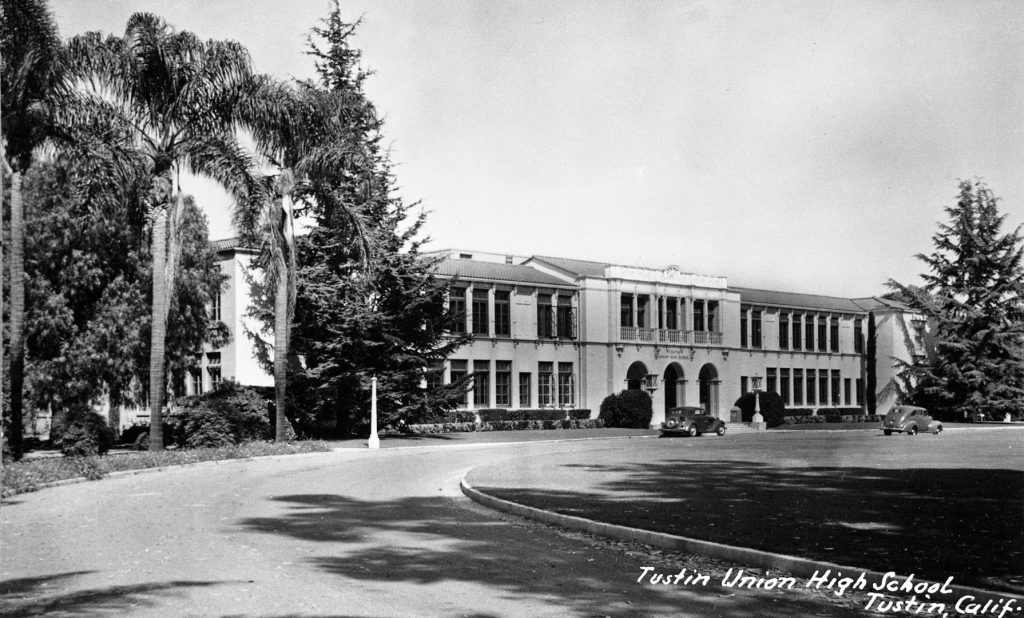 Columbus Tustin established a grammar school almost as soon as his wife and five children joined him in Tustin City from Petaluma, California, in 1870, but 50 years passed before Tustin had a high school.

When the state of California in 1891 offered counties the option of establishing one or more high schools or forming union high school districts, Orange County chose to form unified districts, but by 1920 only six areas had accomplished this. Anaheim, Capistrano, Fullerton, Huntington Beach and Santa Ana all had high schools.

Graduates from Tustin Grammar School with a yen for further education had to attend Santa Ana High School at 10th and Main or, after 1911, Santa Ana Polytechnic High School on West Walnut.

An article in the Tustin News on May 3, 1929, explained that the sponsors of this law had expected Tustin and the Irvine Ranch to be annexed to Santa Ana. However, E. C. Utt helped form a citizens group to fight for the organization of a Tustin Union High School District. This move combined Tustin, Laguna Beach, El Toro, Trabuco Canyon and San Joaquin elementary school districts into one unified district, Tustin Union High School, in the spring of 1921.

Although Tustin was far from being the geographical center of this large area, the board of trustees formed with representatives from each district selected it as the site of the new school.

In short order the voters approved a bond issue of $250,000 and the board purchased 15 acres on Laguna Road between Newport Avenue and Red Hill. The board paid Clarence Bowman and Jacob Fink $41,000 for the property, which included a house that could be used by the superintendent of schools, and hired Mott M. Marston, a Los Angeles architect, to design the building, which would be constructed by local contractors William Bowman and George Preble. That fall about 75 students attended classes in temporary quarters at the Tustin Primary and Grammar School location.

The beautiful $35,000 neoclassic building with a 1,000-seat auditorium, an outdoor Greek theater, domestic science department, mechanical and manual training departments, athletic field and gymnasium opened the following year with the first class graduating in 1924. Three years later a new wing was added, then a larger gymnasium and a swimming pool.

Although a family sedan was sufficient to bring students to and from Laguna the first year, a complex transportation schedule which allowed students to stay after school for sports and other activities quickly developed. Tustin Union High School was in the business of busing as well as educating.

J.W. Means came from Banning, Calif., to open the school as its first superintendent and remained at the helm until his death in 1940. Many of the early teachers , including Emma B. Hield, Stella Yocum, Madge Stephens and Clara Macomber, stayed at Tustin until they retired.

In 1966, the original building was judged to be unsafe in case of an earthquake. It took wreckers 10 days to demolish the structure during July of that year. The old building was replaced with the current facility which, without the charm of the original Tustin Union High School, continues to carry on its excellent traditions, excelling in both sports and academics.