Early Red Hill was home to mercury mines and rattlesnakes 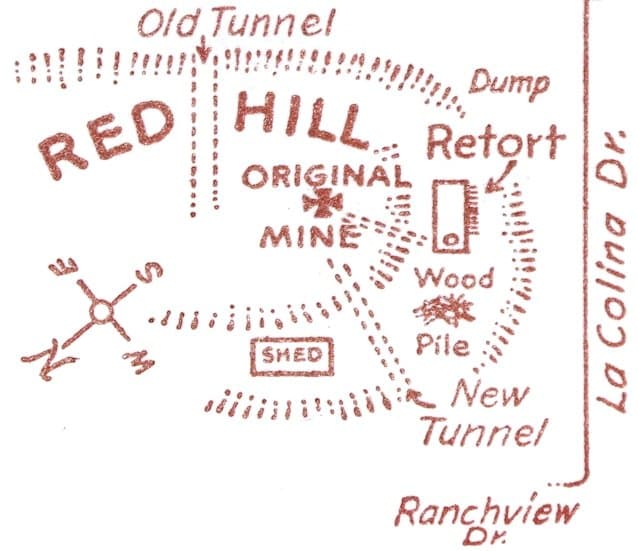 Although Red Hill is now a prestigious North Tustin neighborhood, the hill has a long and colorful history, beginning with the Indians who called it Katuktu, signifying hill of prominence or place of refuge

Although Red Hill is now a prestigious North Tustin neighborhood, the hill has a long and colorful history, beginning with the Indians who called it Katuktu, signifying hill of prominence or place of refuge.
Early Indian legends told of families fleeing to its top when the great flood covered the world. Artifacts confirm that Indians once spent time on its slope.

Maps of El Camino Real, the trail used by the early Spanish explorers and mission fathers, identify Red Hill as Cerritos de Las Ranas. This translates to Little Hill of the Frogs, a reference to the swamp, Cienegas de Las Ranas, which extended from the base of Red Hill to the Upper Newport Bay at that time.

As the ranchos faltered and the gringos took over, the cinnabar or reddish mercuric sulfide, which gives Red Hill its red soil, was recognized as a source of mercury. Several commercial mining operations were attempted over the years.

James Sleeper, historian for the Irvine Ranch Co., which owned Red Hill in the early years, wrote in 1975 that the first mention of Red Hill’s potential was in Harvey Rice’s “Letters from the Pacific Shore” (1869).

According to Sleeper, the initial attempt at mining was probably in 1884 in what was called the Rattlesnake Hill Mercury Mine, followed in 1890 by the Irvine Ranch Co. driving two tunnels and sinking a 30-foot shaft.

The property was leased between 1896 and 1898 by Thomas “Shorty” Harris who worked the mine with a crew from the Santa Clara Coal Mines, sinking several shafts 70 feet deep.

The first stock promotion of the mine was in 1899 when two Santa Ana men, E. J. Kimball and J. A. Turner took a 10 year lease. They sank two shafts in the next six months, one to 80 feet and one to 30 feet. Eight men reportedly were employed around the clock with 50 tons of ore extracted.

A WPA report written during the Depression details the mining operations of Charles McWalters who leased the mine from Felton Browning in 1927.

Although he reportedly extracted 120 flasks of mercury worth about $120 each from the mine, McWalters sold the lease to another mine operator who expanded the facilities.

A diagram of mining operations on Red Hill is included in Herschel C.Logan’s book, “Katuktu.”

Over the years many Tustin boys found the abandoned mine on Red Hill to be a beacon-signaling adventure.

One of their favorite expeditions entailed bicycling or walking to Red Hill where they spent hours exploring the mine shafts and derelict buildings.

Their female classmates (and probably a lot of their parents) never realized how daring they were to visit the hazardous site. But one of the nicknames for Red Hill, Rattlesnake Hill, gives you an idea.

Red Hill was registered as State Historical Landmark 203 in 1935. An unsuccessful attempt to extract mercury was made during World War II, but since then the mine has been cemented and fenced off and the only prospectors are Realtors.