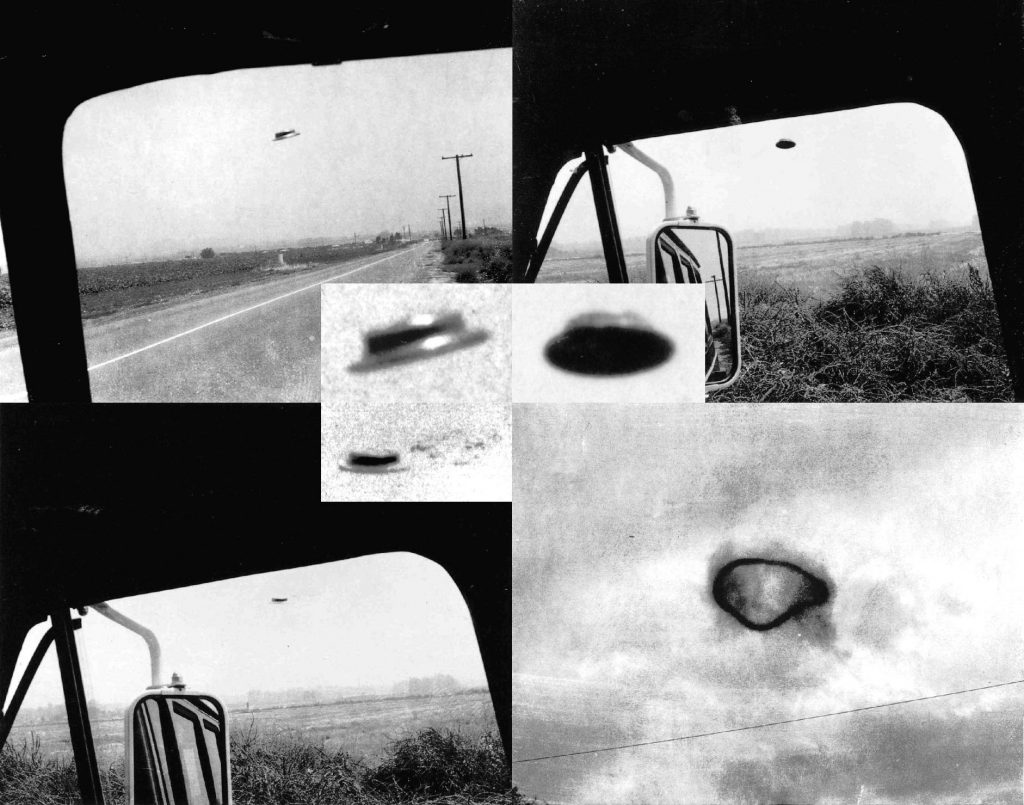 Years ago, when tales of ghosts and hauntings titillated Tustin residents, encounters with “the woman in white” or “a boy with marbles” were either believed or scoffed at. Now we have accounts of unidentified flying object sightings in Tustin and some people believe every word while others are skeptical.

The first sighting of importance took place at about 12:30 p.m. August 3, 1965. Rex Heflin, a California highway maintenance engineer, was traveling near the Lighter Than Air Base hangers in Tustin when his radio quit. Then, through the windshield he spotted a strange object crossing the sky at low speed. Curious, he took four photos of it with his Polaroid camera. The first three photos showed a disk shaped craft, but in the fourth only a black ring remained.

The photos were analyzed by several groups including the National Investigations Committee Aerial Phenomena (NICAP). Some felt the fourth photo was taken at a different time than the first three. However, later analysis suggested the four photos were taken in the same sequence. The overall consensus authenticated the photos and concluded the craft likely emitted some sort of exhaust before disappearing. The electrical interference added to the credibility of the sighting. The radio began to work after the craft departed and later examination showed it was in proper working order.

Despite the results of these investigations, many continue to claim the sighting was a hoax. Elaborate stories were created to explain how the manifestation was achieved.

The latest report of a UFO sighting in Tustin was made to the National UFO Reporting Center in February 2006. The person who claimed the sighting was unsure of the exact date, but remembered it took place just after dark and the craft— a transparent milky lime green football— appeared to be over Tustin, hovering in the sky, moving south.

Another report from Tustin came a month later on March 13, 2006. The sighting of a boomerang with one white light on each of the three corners moving southwest toward the ocean lasted three to four minutes.

Two sightings took place in Tustin in April, 2004. The first, April 14, described as a gray circular object about 40 feet in diameter with lights around the outer edge, appeared at 9 p.m. in an unpopulated area and never moved, just hovered silently. The second, reported to the National UFO Reporting Center as taking place on April 19 at 4 a.m., described a sphere with a soft orange luminescence heading towards the Cleveland National Forest.

A sighting on August 17, 2003 over Tustin was described to the National UFO Reporting Center as two equally spaced bright white lights that appeared and disappeared.

Other sightings were reported from Tustin in 1976 and 1977, but none have created the doubt of that early sighting by Rex Heflin. The four Polaroids although they have been described as” some of the best ever pictures of visiting spacecraft” have never really been explained and are still maligned by those attempting to prove they are part of a hoax.