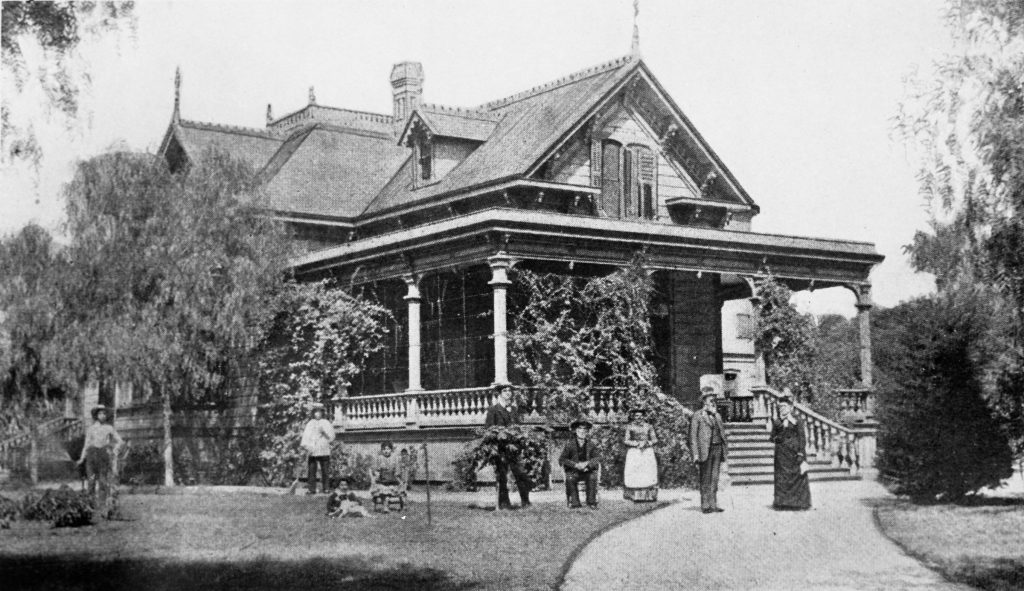 David Hewes is known for his work in reclaiming and restoring San Francisco in the 1850s and 1860s and then supporting the Transcontinental Railroad. But he and his wife played a strong role in early Tustin as well. 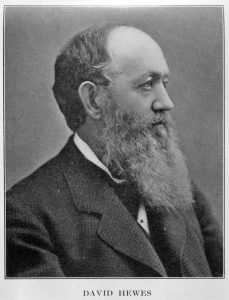 No one ever knew the exact reason why wealthy and sophisticated David Hewes and his new bride, Matilda, selected the small community of Tustin for their home in 1881.

Just back from a yearlong honeymoon in Europe, they had come south looking for a climate beneficial to Mrs. Hewes, who suffered from bronchitis.

It would seem that many southland communities would have satisfied their requirements, but after a short time in Tustin, they purchased land at the corner of Main and B and had a fine Victorian Greek Revival home built.

No records exist regarding either the original owner of the property or the builder. However, the house is a county landmark of public interest, perhaps because Hewes was the wealthiest man in Tustin at that time.

In addition to being recognized in San Francisco for the great fortune he had earned as a contractor there, Hewes was well-known for his part in the ceremony celebrating the joining of the East and the West by rail at Promontory Summit, Utah, on May 10, 1869. A friend of California Gov. Leland Stanford, he had provided the golden spike used in the dedication.

After hiring San Francisco jewelers Schulz, Fischer & Mohrig to cast a 5-5/8-inch-long, 17.6-carat gold spike weighing 14.03 ounces, he had them engrave it with the words, “May God continue the unity of our Country as the Railroad unites the two great Oceans,” names of Central Pacific officials and “the last spike.”

Gov. Stanford traveled to the ceremony by private rail coach, carrying both the spike and a polished laurel tie drilled with four holes. A silver plaque designated the tie, which had been commissioned by West Evans, tie contractor for Central Pacific, as “the last tie laid on completion of the Pacific Railroad, May, 1869.” L. W. Coe, Pacific Express co-president, provided a silver-plated maul to be used in the ceremony.

Other spikes were provided by newspaper owner Frederick Marriott, Nevada Railroad Commissioner F. A. Tritle and Arizona Territory Gov. Anson P. K. Stafford. After Stanford placed the California spikes in the first and fourth holes of the commemorative tie, the Arizona and Nevada spikes were added and all were tapped in with the silver maul.

All spikes were removed at the end of the ceremony and returned to their donors. We presume the “last spike” was kept at the Hewes home in Tustin until 1892 when he donated it to Stanford University, where it joined the silver maul and the spike from Nevada in a display. The Arizona spike eventually went to the Smithsonian.

Despite their wealth and social prominence in the Bay City, Mr. and Mrs. Hewes became part of the Tustin community. They donated property at the corner of Main and C and raised a sizable amount of money for the building of the Tustin Presbyterian Church. Mr. Hewes was one of the 22 charter members.

Mrs. Hewes died in 1887. Two years later, Mr. Hewes married Anna M. Lathrop and returned to San Francisco. He later came south to live at Anapauma, a ranch he developed near El Modena (Orange). The Tustin house was rented out until his death in 1915.