In 1868, Columbus Tustin and Nelson O. Stafford together purchased the land that was to become the future cities of Tustin and part of Santa Ana. 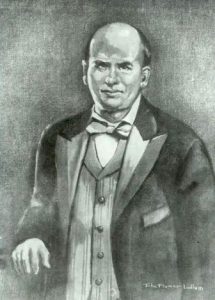 Tomorrow (editor: July 25th, 2007) is the 124th anniversary of the death of Tustin’s founder and namesake, Columbus Tustin, and the end of his struggle to turn a plot of land populated by sycamore trees, rampant yellow mustard and wild flowers into the city of his dreams.

Tustin was born to Samuel Charles Tustin and his wife, the former Mary Frances Flannagan, in Philadelphia in 1826. Eleven years later he moved to Marshall County, Ill., with his parents and eight siblings. Then, 10 years later, to Oregon where the family stayed for two years before moving south to Sacramento, then to Petaluma.

Columbus dabbled in several businesses. He mined for gold in Placerville with his brother. He acquired an interest in Gold Hill, a Nevada quartz mill which crushed quartz to extract the gold. He tried farming. Finally, he turned to carriage-making with a firm owned by Nelson O. Stafford and John Fritsch.

Before long he embarked on another venture, traveling south with Stafford to look for real estate in Southern California where the ranchos were being divided and sold. The two men bought 1,359 acres of undivided land in 1868 from J.E. Bacon and Isaac Johnson. Legal battles were raging as purchasers of rancho land sought formal partition (division) of the acreage so they could develop it. The court eventually approved partition.

Tustin ended up taking title to 839.9 acres bordered on the west by what is Lyon Street today and on the east by Newport Avenue. It is thought that Tustin, after having surveyed a town site of about 100 acres, in blocks 300 feet square, divided into lots 150 x 50 feet, formally established Tustin City about 1870 with a plat map that is no longer in existence.

Another version of how the town got its name is credited to Stella Nau, who told the story that during the first year or so after C. Tustin bought the land people would refer to it as Tustin’s land or they would say, “See Tustin if you wish to buy property”, thus conveying to the hearer that the name of the place was Tustin. They came looking for a town called Tustin and gradually the settlement became known by that name.

Regardless, settlers began to congregate here, purchasing mostly small tracts of five to 20 acres. Many resold their land, but some stayed and helped to develop Tustin City.

Tustin set aside land for a school and soon his five children and others in the community were attending Sycamore School. A post office was established with Tustin as postmaster. Several stores, a saloon and a blacksmith shop opened. Houses, mostly shacks, began to appear. Tustin offered a free lot to anyone who would build a house on it.

Rivalry between Tustin and William Spurgeon, the developer of Santa Ana, was intense. They both wanted the terminal for the extension of the Southern Pacific Railway from Anaheim. Unfortunately, Spurgeon outmaneuvered Tustin and Santa Ana got the depot. Tustin died before Tustin City became what some called “one of the garden spots of the county.”

Let’s hope that wherever he is today he knows that his city finally achieved success.