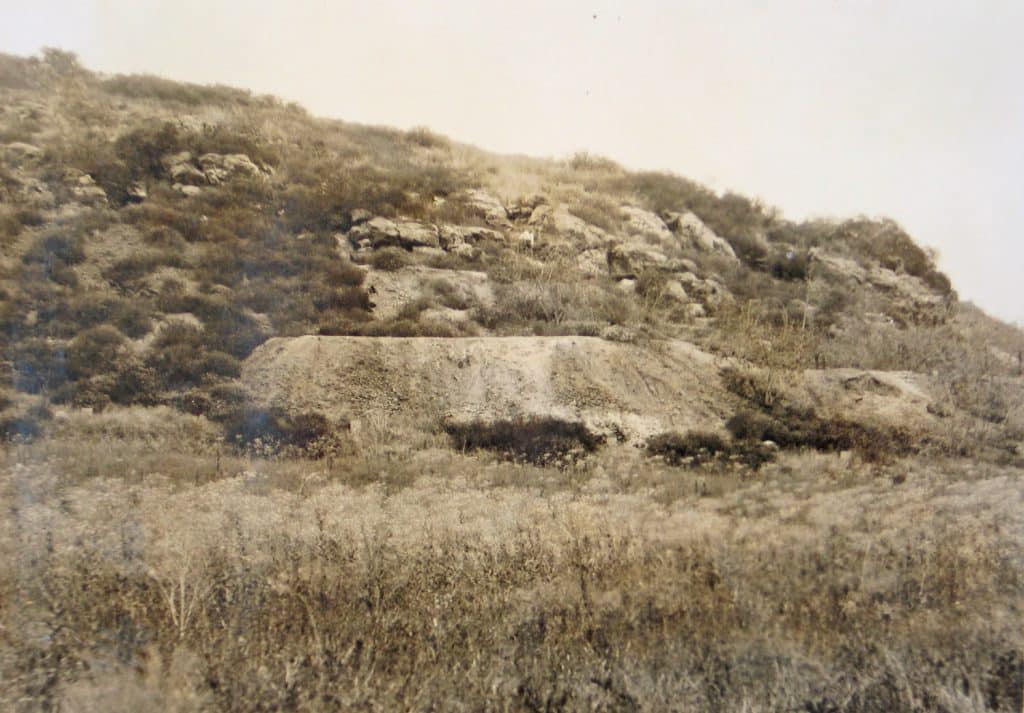 Tustin is situated on the flood plain of the Santa Ana river and its tributary, Santiago Creek, in the heart of Orange County, just south and west of the Santa Ana Mountains, rimmed on the east by gentle hills.  One of these hills is of a distinct shape and color containing cinnabarite, or mercury, which turned its soil red.  We know that hill as Red Hill.

The native Americans who inhabited this area prior to the Spanish called the hill Katuktu.  Katuktu also became known as Cerrito de las Ranas or “Little Hill of the Frogs” because of the many frogs nearby.  In a letter of 1875 it has also been referred to as Rattlesnake Hill, “an appellation which persisted until the turn of the century and with considerable justification judging from contemporary accounts”.   Cerro Colorado or “Red Hill” served as a survey point in the establishment of the boundaries of the land that was granted to Juan Pablo Peralta and Jose Antonio Yorba.

The first mining activity on the hill was in 1884 when it was mined for the cinnabar, or quicksilver (mercury) and became a regular mining operation on the Irvine Ranch, under the name of “Rattlesnake Hill Mercury Mine”.  It is the only deposit of cinnabar ore in the county and one of the few in the state.  Irvine leased the mine to Thomas “Shorty” Harris from 1896 to 1898.

After Shorty Harris’ efforts to mine Red Hill, E.J. Kimball and James A. Turner took out a 10-year lease and sold stock in the operation. They sank several shafts but did not have great success.  In 1907, Felton P. “Frank” Browning bought the hill from Irvine.  During the Great War of 1917-18 there was a demand for mercury, so A.W. Sheets leased it from Browning and tried his hand at mining, without commercial success.

The mining on Red Hill may not have been a commercial success, but that did not diminish its historical importance as a landmark to the early Native Americans, the Spanish explorers, the mission padres, the rancheros and various stage drivers traveling between San Diego and Los Angeles.  Noted historian Terry Stephenson proposed Red Hill as a State Historical Landmark in 1930. The honor was granted on June 20, 1935, when it was registered as State Historical Landmark #203.

Red Hill was the site of a number of abandoned mines, but most are all closed off now. The hill is now a private housing development. Red Hill continues to be a local landmark for the surrounding community, and there are a number of local entities named after it, including companies, Red Hill Avenue, a school name, a church and a fire station. (This paragraph courtesy Wikipedia)